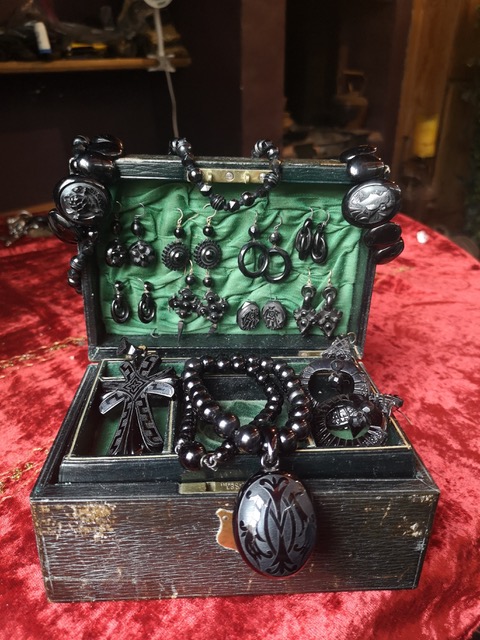 If you are tired of vintage trams and banana stickers or napkins are no longer floating your collectors’ boat, then why not consider how to collect antique Whitby jet? Unlike my fellow gemmologists, who all have their personal gem and jewellery collections, I’ve found over the years that there are serious benefits to collecting jet over all other gemstones.

Firstly, you will encounter very little in the way of difficulty when colour coordinating the collection.

Secondly, jet is considerably cheaper than most other gemstones.

Thirdly, it is reasonably plentiful on the second-hand market.

Perhaps even more exciting is the range of items out there. An avid collector will soon realise that there is almost zero chance of repetition in your new hobby. I personally have vowed to my husband that if I even acquire two identical items then I shall be sure to sell one (head over to the antique Whitby jet page and you will see that I am letting very few of my collection go).

Now that I have your interest, how shall we go about starting our collection? Well, there’s something important I must tell you from the start about how to collect antique Whitby jet jewellery. The term ‘jet’ and more particularly ‘Whitby Jet’ is deemed as rather sexy in the jewellery trade. By this, I merely mean that by adding the term ‘Jet’ to a particularly uninteresting 1890s, 1920s, 1950s or indeed 1980’s black item the price of such artefact can potentially rocket. As a result, for example, everything black, old and plasticky on eBay will be listed as jet. Likewise, everything at flea markets and collectors fairs falling into the old and black category will also be labelled as jet. Why on earth is this I hear you cry, and what on earth is one to do?

The problem has arisen due to the fact that when polished black gemstones are often very difficult to tell apart. They are also opaque which causes a problem for us gemmologists who rely almost entirely on information coming from the interaction of visible light with the interior of the gemstone for our methods of identification. As a result, we cannot use our gem testing equipment on black opaque gemstones. We also live in a period of time when black gemstones are not valued highly (this has not always been the case) and as a result of this, there is little in the way of funding available for researchers such as myself to increase our knowledge of the subject. All this cumulates in a lack of sound data on which to make a positive identification of jet and other black gemstones and leads to a situation where the unwitting or indeed unscrupulous are able to deceive the unsuspecting consumer. (Learn more about jet here What is Whitby Jet?) Adding to our problems is the fact that round about 1880, right at the height of the Victorian Whitby jet boom, the supplies of Whitby jet ran out. Those clever Victorians needed a simulant and as a result, invented many convincing materials which could easily masquerade as Whitby jet.  BUT before you go back to your vintage tractors and apple stickers all is not lost! There is after all, always hope.

How to collect Whitby jet jewellery.

Firstly say to yourself ‘If it’s not jet-black, put it back’. Whitby jet is jet-black, it’s actually where the saying came from! Many of the simulants have added colour pigments which are not stable in UV light. As a result, they become a khaki colour with age. This is especially true for Vulcanite.

The second clue lies in the construction of the piece of jewellery. Whitby jet is always carved, Vulcanite and other early biopolymers were cast in moulds and organic materials such as dyed pressed horn were hydraulically pressed. Glass will also show evidence of being molten at some stages – bubbles and the like. If we know what we are looking for, then we can identify quickly what cannot possibly be jet.

Let’s have a look at what I mean.

Firstly it is not possible to screw into the jet. If you see a screw then I would bet my reputation that the item is not jet.

Whitby jet mounts are glued into position, as a result, there will be no screws. The mounts in Victorian Whitby jet pieces are usually base metal, however precious metal examples are encountered as below.

The reverse of an item can give us a wealth of information regarding the identity of the artefact. Whitby jet, almost without exception will be polished on the reverse. This is not the case with other materials. Vulcanite is often left bearing heavy file marks, whereas bog oak items often have evidence of lathe turning. Note the wood grain visible on the bog oak brooch below, you will never see this in Whitby jet – another clue!

The reverse of an item can also be used to identify dyed pressed horn. Now, this material, made from cows horn, dyed and then hydraulically pressed in moulds (because its thermoplastic) is perhaps the most convincing simulant of Whitby jet you’ll even encounter.

The material does, however, have one little drawback in that it is biodegradable. As a result, if it encounters damp conditions it will begin to break down or biodegrade. Horn has roughly a 500-year lifespan in the archaeological record due to this phenomena hence we never find Viking drinking horns!  We term this in the jewellery trade as delamination. I like to think of this as the sort of condition you’d expect to find a tramps toenail in, all fungusy and flakey. On the back of brooches, you will see wavy lines, on the edges if slightly damaged you will see the tramps toenail effect.

On to bubbles. Bubbles are bad, very bad indeed from a jet perspective. They mean one of two things, either you are looking at a cast plastic or glass which was once a liquid, or you have the dreaded reconstituted jet from the Georgian Republic on your hands. The latter is very bad for the current Whitby jet industry. It is a true jet which is something I suppose but once it has been fashioned into jewellery it is difficult to detect. More on this in another blog, but it is also a threat to the antique market as it is powdered, mixed with a resin and made into beads. The retailers simply aren’t aware of this deception, some of the fakes are good, with vintage catches to deceive us further. The reality is, a good string of Victorian Whitby jet beads will set you back £700, the reconstituted ones are retailed at £20 at fairs across Europe, but when they enter the British antique market they will be retailed as antique jet at a high price. Two things to watch out for, firstly as I mentioned bubbles. You need a 10x loupe, check each bead. If its recon, you will find a bubble. Secondly, be very wary of strings of beads which are not graduated. This is uncommon in genuine Whitby jet but I often observe it in the recon beads. Be in no doubt however, these beads feel like Whitby jet, look like Whitby jet, smell like Whitby jet….they are out to get you. Don’t let them fool you!

Let’s talk hinges. In order to make a locket, the firm favourite for Victorian mourning, the item in question requires a hinge. Now in some materials, like Vulvcanite for example, it was possible to cast the hinge into the item and simply connect the parts with a rivet of sorts. Also, notice the moulded pattern on the Vulcanite locket below. This is a clear indication that this is not Whitby jet.

In Whitby jet, an integrated hinge is simply not possible. The hinge was therefore often formed from a patented metal hinge mechanism which would be then inlaid into the body of the jet itself.

Often the item described as jet will be a cameo brooch. Now in the case of Whitby jet, the surround and the cameo itself are both made from jet unlike in shell cameos. Cameos are common in the simulant materials also with one big difference – the depth of the cameo itself. In Whitby jet the cameos are extremely deep.

In the simulant materials, horn, Bois Durci, Vulcanite etc this is not the case, cameos are shallow in comparison to Whitby jet.

Some of the jet simulants, unlike the Whitby jet examples, have a frame made from metal. If you see this, as in the Bois Durci cameo above and pressed horn example below, it is a sure sign that the cameo is not jet.

When considering how to collect antique Whitby jet, we should probably also talk hallmarks, kite marks and the like. Most of the Victorian Whitby jet manufacturers were illiterate and therefore it is incredibly rare to find signed piece. The ones that do exist by Speedy and the like are exceptional workmanship and command very high prices.

When the Whitby jet supplies were becoming exhausted in the 1880s and the simulant market was flourishing, the jet workers of Whitby tried to introduce a jet classification system. This mark wasn’t however widely adopted and I have personally never seen a piece of jet which bears it, but items were marked with a Star of David and;

Other manufacturers decided on a registry mark approach. This was rather odd as there wasn’t an approved mark for jet. The snake bracelet below, which is in my collection bears a registry mark for ceramics and dated 13 July 1881. 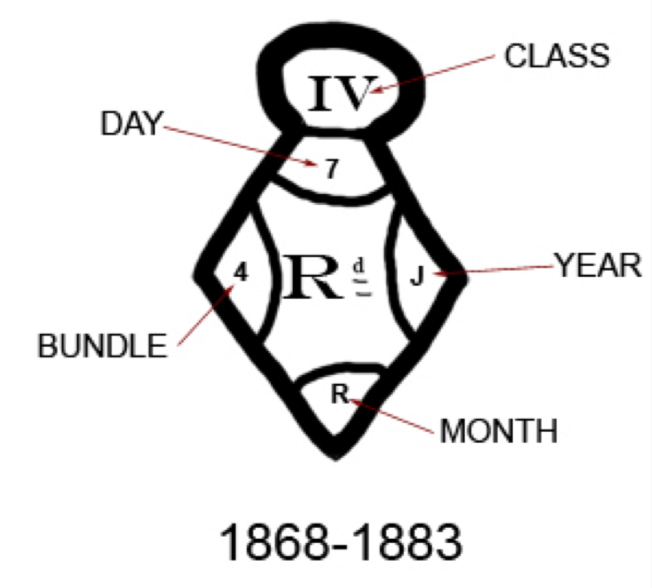 Anything other than these two marks on a black item of jewellery would indicate that the item is not Whitby jet. Pressed horn commonly has marks similar to that photographed below.

Plastic items also regularly show ‘made in….’ marks as shown below.

All the materials I’ve documented above have a low specific gravity (feel lightweight), are warm to the touch and feel generally plasticky, like Whitby jet. The market is however also swamped with glass items, generally described as French jet. These items feel glassy, cold, heavy and not plasticky like jet. These items can be ruled out by tapping them gently on your teeth. If they feel like glass – they are glass, not Whitby jet.

Hopefully, this blog has wet your whistle for jet collecting and given a basic guide on how to collect antique Whitby jet jewellery! I will be visiting each of the jet simulants in turn on future blogs so watch this space… but in the meantime, you can learn more here https://gem-a.com/component/k2/news/whitby-jet-rings-necklace-jewellery-simulants 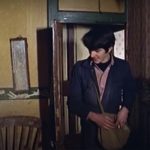 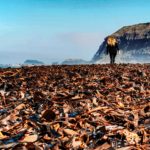 2 thoughts on “Magic and Whitby Jet”